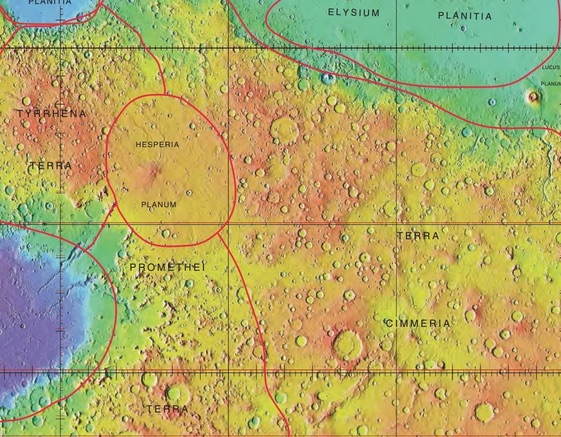 Terra Cimmeria is a large Martian region, centered at 34.7°S 145°E and covering 5,400 km (3,400 mi) at its broadest extent. It covers latitudes 15 N to 75 S and longitudes 170 to 260 W. It lies in the Eridania quadrangle. Terra Cimmeria is one part of the heavily cratered, southern highland region of the planet. The Spirit rover landed near the area.
The word Cimmerium comes from an ancient Thracian seafaring people. The land was always covered in clouds and mist.
A high altitude visual phenomena, probably a condensation cloud, was seen above this region in late March 2012. NASA tried to observe it with some of its Mars orbiters, including the THEMIS instrument on the 2001 Mars Odyssey spacecraft and MARCI on the Mars Reconnaissance Orbiter.